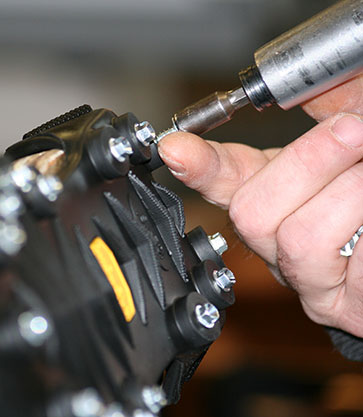 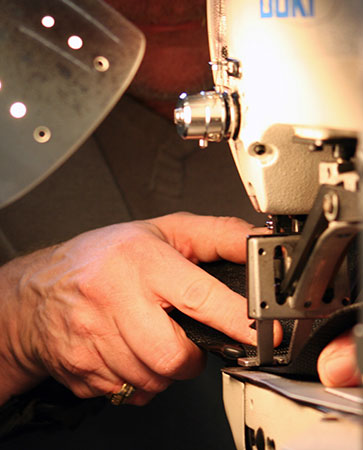 In October of 1980, a 35 year old from Fredericton, Ross Hanson, was driving home from work when his car suddenly blew a tire and ran into a ditch. When he came to, he was in a hospital in Saint John, paralyzed from the neck down. He was told he would never walk again. It only took Hanson 3 years to prove them wrong. He relearned everything from sitting to writing to walking. Walking became easier as time progressed, but he still found it hard to get around in winter's icy weather. He searched the market for good quality antislip footwear, but only found highly specialized products for mountain climbing and nothing suitable for the average consumer. He visualized a product that was of simple design, easy to attach, provide a stable, level platform, remain flexible in all conditions, comfortable to wear, extremely durable, and above all, are effective. With the help of his longtime friend, Peter Baldwin, he was determined to build his own. Hansen knew a little about business, and his friend Baldwin was positive they were onto something.. In 1987, they pooled their savings of $5000, and incorporated their company called SuperSoles.

Icer's Inc.Two years of intense research, and development resulted in the production of 26 working prototypes based on the principle of studded tires. Friends and Neighbors were enlisted to test the product. Finally they reached a prototype that they knew was superior, so they applied for, and obtained their first patent. Following that, Hansen took out a 100,000 dollar loan after mortgaging the equity on his house.

By the fall of 1989, production was well under way. With a staff of five, they cut and assembled all the pieces by themselves in a rented church basement. At first, Hansen thought his product would be limited to the elderly and disabled, until he was able to crack the safety market. He signed a major contract with Canada Post to outfit all it's letter carriers, and soon his company had established market credibility. Hansen saw his profits double in his second year of production to over $150,000.

As more orders poured in, Hansen had to find more space. He took out another loan of $50,000, to lease a warehouse and purchase new machinery. He set his sights on expanding into foreign markets. He achieved that goal in 1991, after licensing a manufacturer in the U.S., and finding a distributor in Norway. He got more than he bargained for when he found it hard to keep up with all the new business.

He leased a larger warehouse, and crammed it with more supplies and machinery. His sales continued to increase, as he broke into more cold climates such as Sweden, Switzerland, Germany and Japan. By 1995, SuperSoles, now renamed to "ICER'S INC.", had reached close to $1 million in sales. Today there are more than 500,000 pairs in use in 9 countries! Hansen, who has been everything from janitor to CEO, draws his strength from knowing his product is helping people around the globe as well as right here in Canada. "ICER'S" were used by hydro companies during the terrible ice storms which ravished eastern Canada in January 1998. Sales are expected to jump again this year.